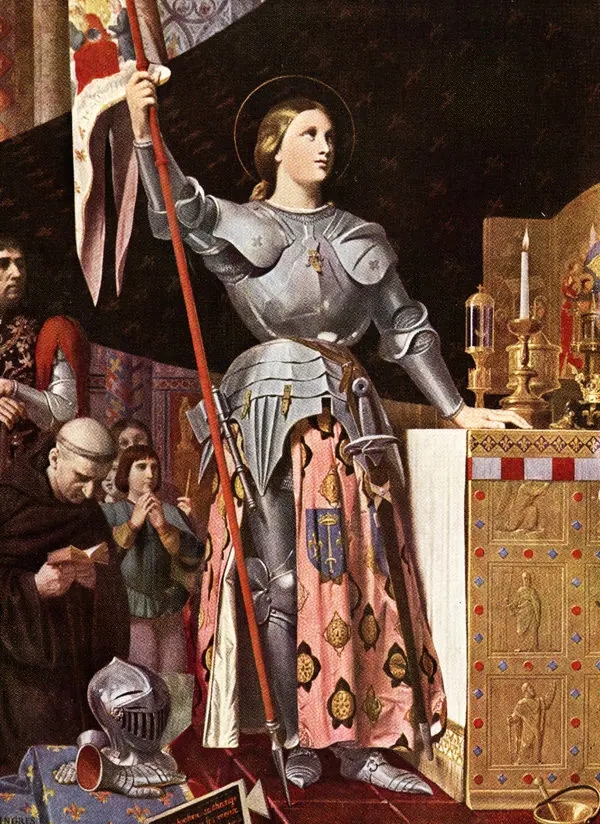 Jeanne d’Arc, a young peasant woman, believed she was commanded by God to unite the French people and repel the English invaders from France. She led the French army in a crushing victory at Orleans in 1429, one that severely crippled English attempt conquer France during the Hundred Years War. Two years later, Joan was captured by Burgundians, French collaborators to the English, and was burnt at the stake as a heretic.

At the time, an ensuing conflict between the dauphin Charles VII, son and heir of the Valois King Charles VI, and the Lancastrian English King, Henry VI, took place. The dispute was over the empty French throne and control over French lands. King Henry was in alliance with Philip the Good, duke of Burgundy, and their armies occupied much of the northern part of the Kingdom of France.

At the end of 1427, five years after his father’s death, Charles still had not been crowned. All of his hopes to ascend the throne, unite the French people and oust the English invaders had faded. To make matters worse, Reims, the traditional city for the inauguration of French Kings, was well within English held territory. As long as the French throne remained uncrowned, the dauphin’s rightful claim to be king was subject to challenge.

Joan the Maid of Orleans

Since Domremy lay on the frontier between the lands of the Anglo-Burgundians and that of the dauphin, the village was subject to constant threats by Burgundian and English knights. Many villagers fled their homes before the raids, others perished at the hands of their attackers.

Joan first heard the voices of St. Michael, St. Catherine, and St. Margaret in her early teens. They implored her to release France from the English. Led by her divine voices, Joan travelled to Vaucouleurs and exhorted the local commander, Robert de Baudricourt, for permission to send her across English held territory to see the dauphin in Chinon.

Though, Robert insisted she had lost her sanity. He refused to believe the sixteen-year-old girl’s accounts of her visions and sent her home. Early in the year of 1429, Joan returned to Vaucouleurs. This time her steadfastness and piety won the respect of the village people and the commander permitted her to travel to Chinon, accompanied with six knights. Joan’s purity and virginity earned her the title ‘Maid of Orleans’.

On 6 March 1429, Joan was allegedly invited to the dauphin’s court. Charles, having prepared for the Maid’s arrival, strategically disguised himself as one of his courtiers. His reason for doing this was to put Joan to the test: If she was who she claimed to be, she would recognize him the moment she saw him. Joan’s success in identifying Charles undoubtedly surprised him, but it must have also been an immense relief to him as well. As Charles perceived it, Joan’s ability to recognize him was interpreted as divine confirmation of his legitimate claim to the throne. She was also successful in the ecclesiastical examination to which she was subject at Poitiers. For those reasons, she was given charge of French Army.

The following month, Joan led the French Army against the English forces in Orleans and by early May, they successfully forced the English to lift the siege and leave the Loire valley. Soon after that, Joan with the aid of 12,000 soldiers, accompanied the dauphin to Reims where he was crowned King. At Charles’s coronation, Joan the Maid of Orleans was granted a place of honour next to the new King.

In the following year, Charles VII rewarded Joan’s services for France by placing her as head of the French Army. However, he failed to support her future military endeavours. Therefore, she took matters into her own hands. Her campaign to take Paris failed miserably and her later march on Compiegne ended with her capture by the Burgundians. Joan was sold to the English, who, after a lengthy trial conducted by the Inquisitor Bishop Cauchon, was charged with sorcery and witchcraft. She was taken out into the Churchyard at St.Ouen and burnt at the stake on 30 May 1431.

Joan’s achievement created a national consciousness among the French people that grew stronger after her death. Twenty-five years after her execution, after the English had finally been driven out of France, the Pope at Avignon ordered a rehearing of Joan’s trial. At the time, the French people already revered her as the saviour of France. After hearing from witnesses, Joan was declared innocent of the charges against her. In 1920, nearly five hundred years later, Pope Benedict XV canonized her as a patron saint of France.