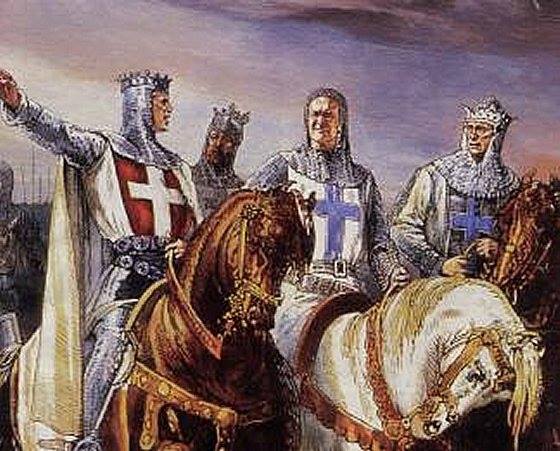 Following Pope Urban’s speech at Clermont in November 1095, the great lords of Europe set to work, preparing for the great expedition. Not only did they have to finance their own way, these lords – who would, in the Holy Land, assume control over the crusade and become known to later historians as the prominent figures of the First Crusade – had to assemble an army. They also had to make sure their army was well equipped and supplied.

Who were these great lords of Western Europe?

Robert II of Normandy – other known as Robert Curthose or Robert Courteheuse – played a key role in the First Crusade: He aided the Christian army in the capture of Jerusalem.

In Europe, his life was complete chaos. The eldest son of William the Conqueror, Robert inherited the duchy of Normandy after his father’s death in 1087. Unlike his father, Robert was an incompetent leader. He wasn’t able to establish his authority in Normandy and he couldn’t subdue his vassals. In the early 1090s, Robert faced an even greater threat. His younger brother, King William II of England, invaded Normandy and demanded that Robert hand over two counties to him. A peace was made between the two brothers in 1094, shortly before Robert took the cross.

Born the eldest son of Theobald III, Count of Blois, and Garsinde du Maine, Stephen inherited his father’s vast estates in Blois and Chartres. In around 1080 – nine years before his father passed away – Stephen married Adela of Normandy, the daughter of William the Conqueror.

Stephen of Blois was considered a coward because he fled the camp during the siege of Antioch in 1098 and returned home having not fulfilled his vows. After being pressured immensely by his wife, Stephen renewed his spiritual vows and took part in the 1101 crusade.

Raymond of St. Gilles, Count of Toulouse, was the first noble who responded to Pope Urban’s call for Holy War. Rumor has it that Urban told Raymond about the idea of Holy War before he preached it in Clermont.

Raymond was also by far the wealthiest lord who took part in the First Crusade. He brought with him military expertise, for it was reported that he fought alongside the Christians against the Muslims in Spain. Regardless, Raymond had the resources and the know-how to command an army because he commanded a standing army in the Provencal region of France. Many of his contemporaries regarded Raymond as a devout Catholic. His motives for joining the crusade were religious, but no doubt also materialistic. Count Raymond wanted an eastern lordship for himself and he wanted to be recognized as the leader of the Crusade.

Bohemond was the son of Robert Guiscard, other known as ‘Robert the Wily’. Bohemond, who was around the age of forty when he took the Cross, was already highly skilled in the art of warfare.

In the early 1080s, he fought alongside his father in the ill-fated Balkan campaign against the Byzantines. Upon Robert’s death in 1085, Bohemond’s younger brother, Roger took Robert’s estates for himself, leaving Bohemond with only a small fief in the duchy of Apulia. In response, Bohemond launched a military campaign against his brother. He managed to win back most of his father’s lands before he left for the Holy Land.

Bohemond’s motives for joining the crusade are undisputed: Having garnished little wealth in Europe, compared to the likes of Raymond of Toulouse and Stephen of Blois, he was determined to obtain an eastern kingdom for himself.

Tancred of Hauteville was only twenty-four when he took the Cross in 1096, and poor. Bohemond, who was Tancred’s uncle, financed Tancred’s expedition. Because Tancred was related to Bohemond and because of his prowess in battle and capability of commanding an army, he would play a significant role in the First Crusade, especially in the setting up of the Kingdom of Jerusalem.

Godfrey of Bouillon, son of Eustace II, Count of Boulogne and Ida, daughter of Godfrey III, the Duke of Lorraine, was supposed to inherit the Duchy of Lorraine from his uncle, Godfrey III. However, the German Emperor, Henry IV took the Duchy for himself, leaving Godfrey with little wealth. For that reason, Godfrey had to sell his estates of Rosay and Stenay in order to finance his own army.

Godfrey was a pious man: His motives for joining the Crusade were, for the most part, purely religious.

Baldwin of Boulogne was the younger brother of Godfrey. For that reason, Baldwin was not in line to inherit his family’s estates. They had intended for him to spend the rest of his life as a cleric, dedicated to the Church. Baldwin, though, was unfit for such a pious lifestyle and it’s likely he didn’t even want it. So, he chose instead to live the life of a layman.

Baldwin was a man who lusted after land and riches; quite unlike his brother Godfrey, who wanted only to serve God. He found no prospects of wealth in being a layman, so when Baldwin joined the crusade, he took his wife and children with him to the Near East with the intention of establishing an eastern lordship for himself.